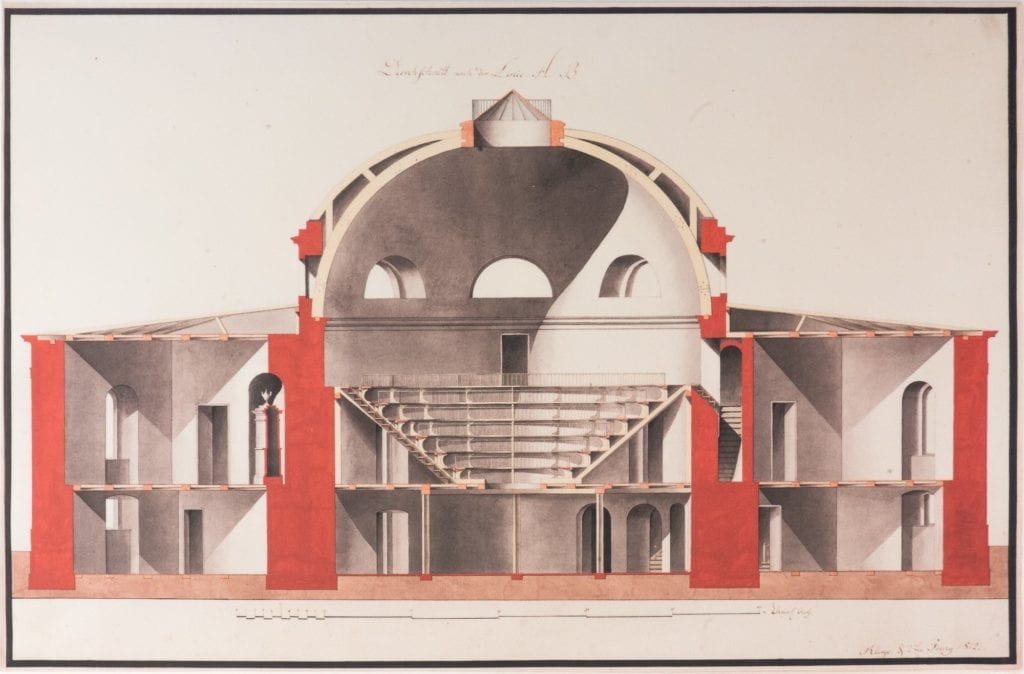 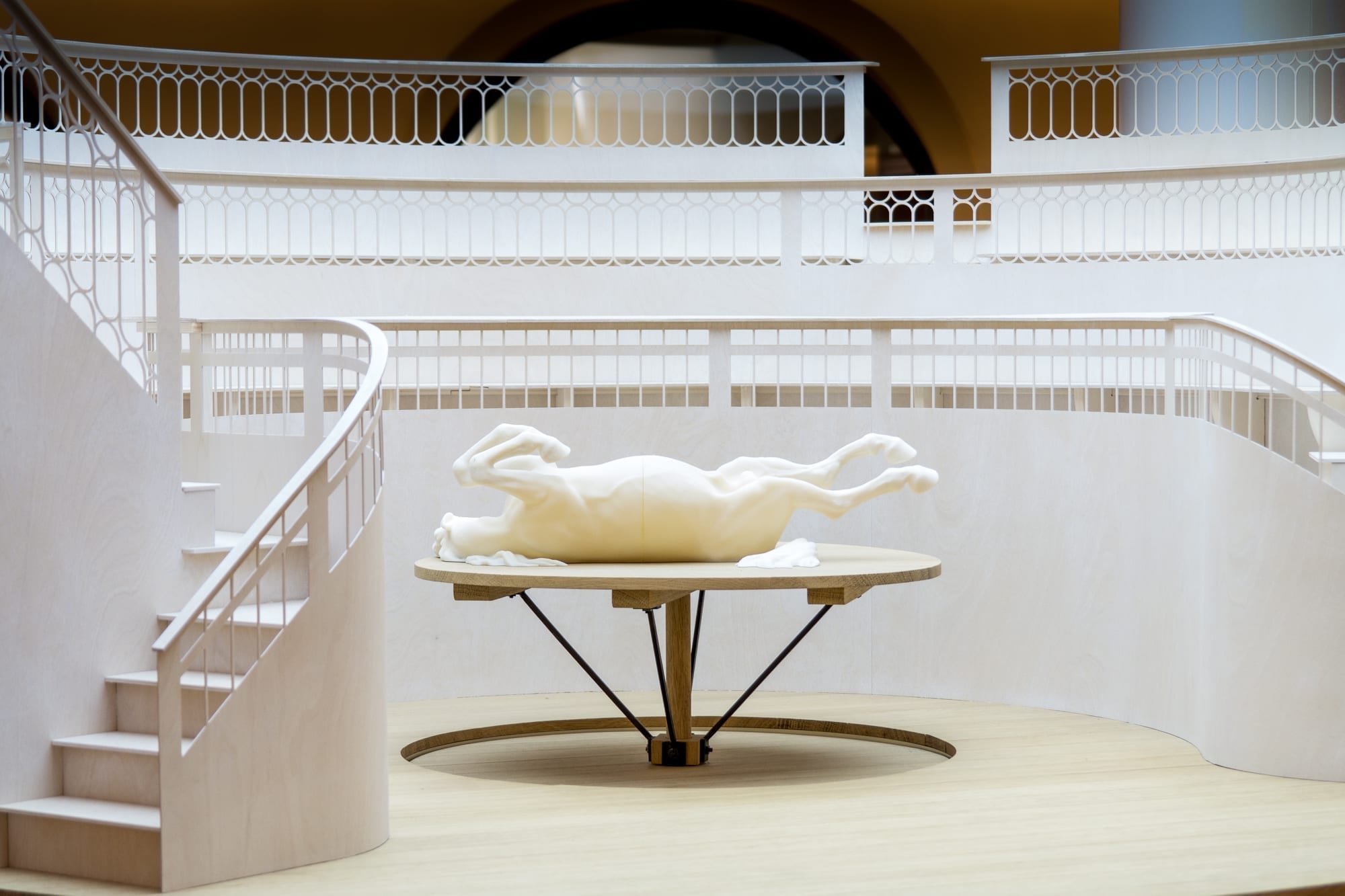 For over 200 years, the Veterinary Anatomy Theater has provided science with an impressive stage. It is Berlin’s oldest surviving academic building with once unique conditions for veterinary teaching and research. The central building is designed as a domed and staged lecture hall and it is a masterpiece of Prussian early classicism. The architect Carl Gotthard Langhans (1732-1808) combined the ancient models of the round temple and amphitheater and created a completely new architecture of knowledge: aesthetics, symbolism and practical use formed an effective link. In the center of the building was a lift leading from the preparation room to the anatomy theater, which enabled a spectacular staging of the anatomy lecture. This unique historical constellation of presenting anatomy both scientifically and aesthetically effective, motivates us today to further develop exhibitions as an independent form of knowledge: as a link between scientific, aesthetic and social practice.

King Frederick William II orders the establishment of a veterinary school. The baroque “Reuss Garden” on the city limits is acquired especially for this project. It includes a pleasure garden and water features. Under the direction of the architect Carl Gotthart Langhans, a domed building is planned for the Royal Veterinary School in the middle of the garden. 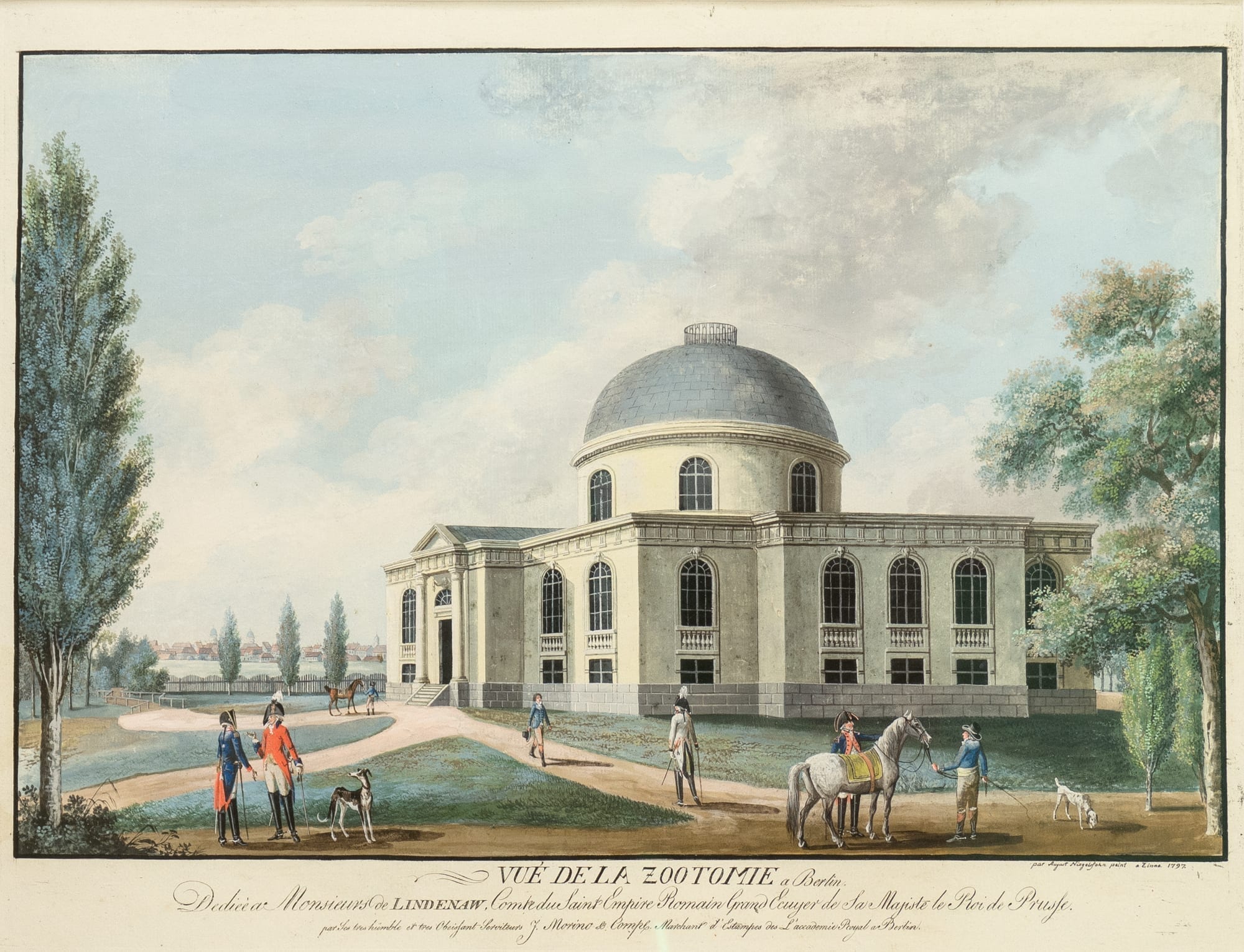 Ceremonial opening of the Royal School of Veterinary Medicine in Berlin for the training of “horse doctors” and blacksmiths for the Prussian cavalry and to combat rampant animal diseases such as rinderpest. The classicistic building with its anatomical theatre is perceived from the beginning as an architectural gem. The grounds now house paddocks and stables as well as a horse clinic and a horseshoe smithy.

The teaching activities are increasingly expanding, so that the library and parts of the collection move to the newly constructed main building (today Luisenstr. 55) for reasons of lack of space. At about the same time, the surrounding area is transformed into an English landscape garden. 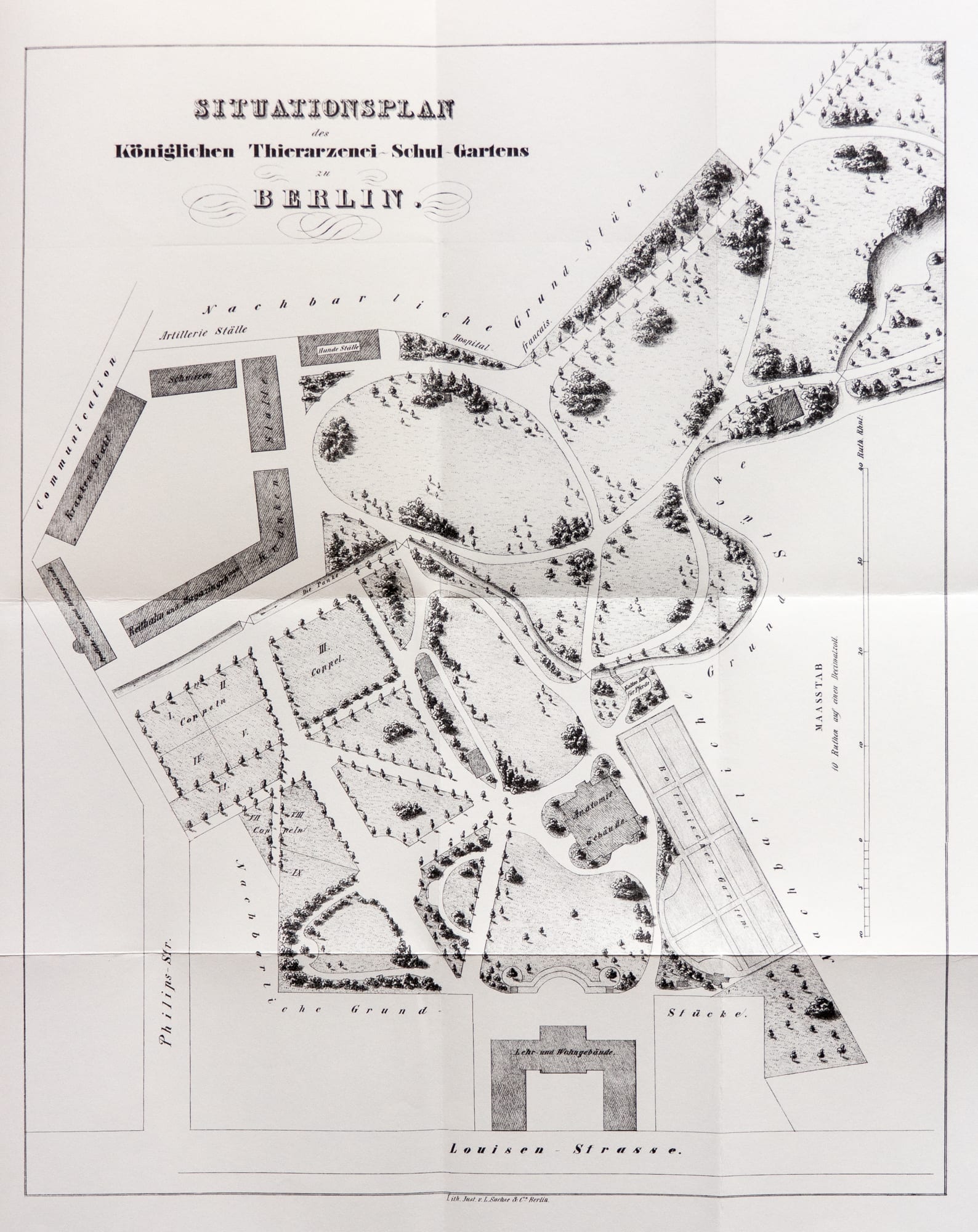 The Tieranatomisches Theater receives an extension, the “Gerlach-Bau“ (Gerlach building, named after Andreas Christian Gerlach, the school’s director). It is designed as an autopsy hall for pathological studies and houses scientific collections.

After six years of standing empty, the food hygiene research department is moving into the building, which is already in need of renovation. The corner rooms are converted into laboratories and a display collection is established in the rotunda. In the Berlin saying, the Tieranatomisches Theater becomes a “Trichine temple” (trichinae = parasitic threadworms).

The Gerlach building is extended by a slaughterhouse. The University of Veterinary Medicine is integrated into the Association of Berlin Universities as part of the Faculty of Agriculture and Veterinary Medicine. In the person of Wilhelm Krüger, full professor of veterinary anatomy, a National Socialist becomes Rector of the Berlin University. Only a few members of the teaching staff resist – publicly only the parasitologist Wilhelm Nöller.

In 1950, six professors leave the faculty to establish a second veterinary medicine in West Berlin at Freie Universität. In 1968, the Section of Animal Production and Veterinary Medicine was founded at Humboldt-Universität, which focused its research more strongly on industrial livestock production. 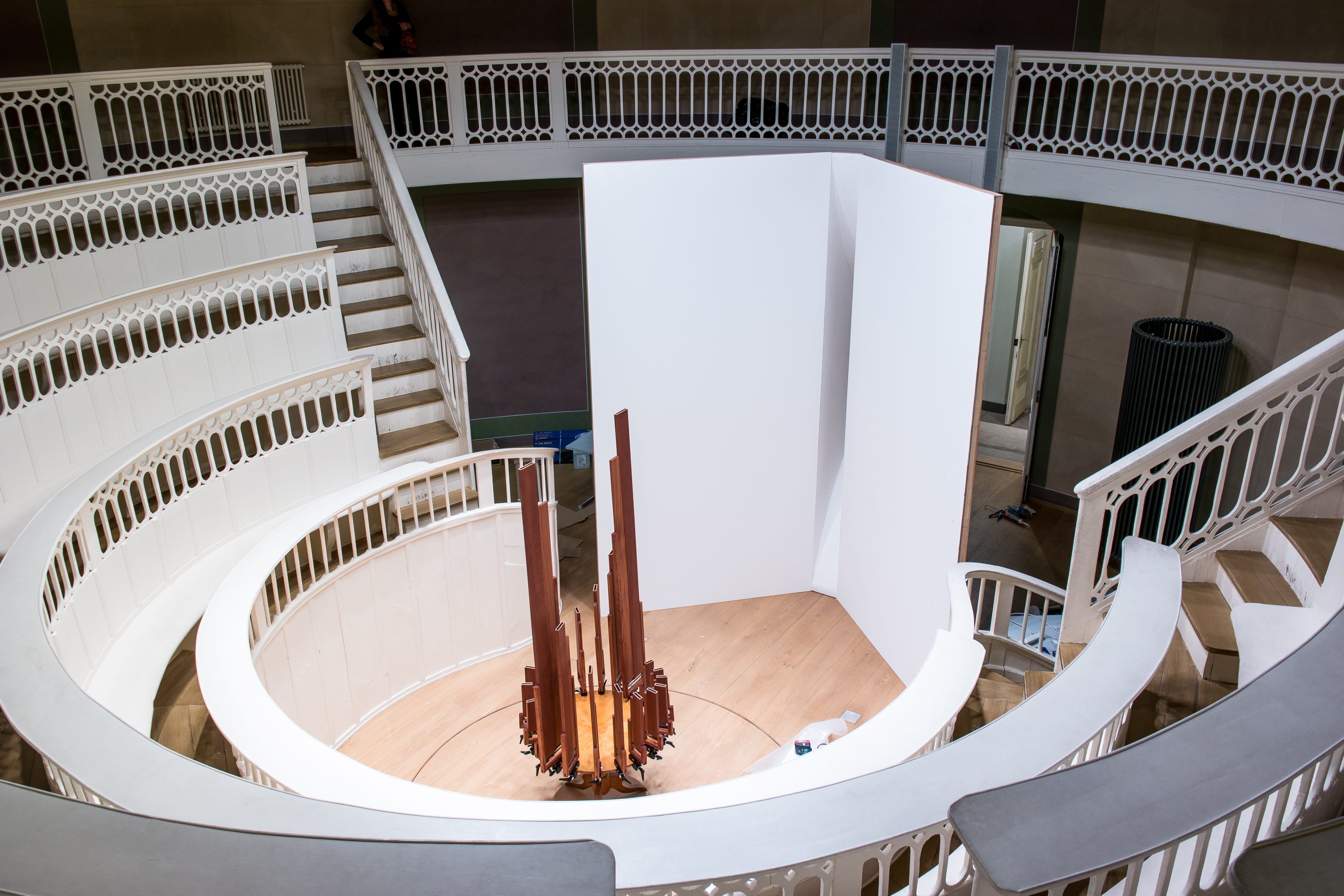 Renovation and restoration of the Tieranatomisches Theater under the direction of the architects Müller Reimann. After reopening in 2012, the Hermann von Helmholtz Centre for Cultural Techniques at Humboldt University uses the building for exhibitions and events.